The Phone Call - A True Story 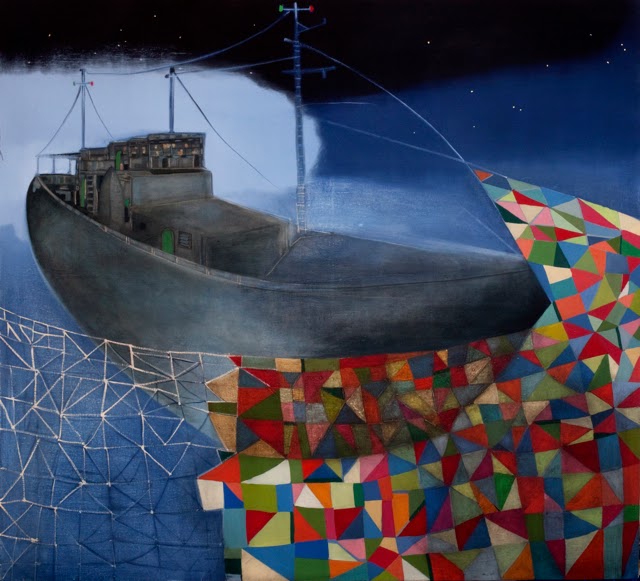 The telephone woke me with a heart hammering jolt.  It was five a.m.
From this moment on, a phone call in the early hours would always be linked with impending grief.

“Not too good Em.
Are you sitting down?”

I had never heard this cliche spoken in the real world.  It made my hammering heart cease it’s banging for a moment. A millisecond of endless silence.

Spark had never called me before.  We had met six months earlier on a rather difficult and peculiar trip to Cuba onboard Burri, my father’s floating home, a decommissioned fishing trawler from Holland. We were an odd and disparate crew.  Spark, stocky, mustached and stubborn, a mad electrician from texas.  He hated Americans and South Americans and basically humans in general with the odd exception.  He was blisteringly funny, fiercely opinionated and intelligent with many practical abilities.  Beneath his tough exterior there lived a very big heart.  Johan, a somewhat delicate Dutch friend of my sister’s was also coming with us.  He was a meticulous and gifted carpenter who was taking time out from his life in Holland and his relationship and appeared to be going through an emotionally difficult time.  James, my boyfriend of 3 years, a sculptor and a complex combination of tough and vulnerable was trying to hold our relationship together and also trying to befriend my father who was famous for being, without exceptions, unimpressed by all of his daughter’s suitors. Then there was me, Emma.  Who was I then?  A 25 year old girl, trying to be a woman and failing spectacularly.  Still full of sorrow about my mother’s death and a head full of confusion and uncertainty about the life that lay stretching out ahead of me.

We all met up in Fort Lauderdale where my father had come to collect supplies for sand blasting and painting the ship.
It had been a few years since I had seen my father and he had aged dramatically.  He looked somewhat malnourished and had a terrible bone rattling cough that once started was impossible to stop.  Everyone was prickly.  I was fighting off the impending signs of falling out of love, Spark, angry with the world was drinking too much, James was trying to be helpful to my father, Johan just wanted to be left alone.
After numerous delays and logistical headaches, we finally left Fort Lauderdale for Havana.  It was a rough trip.  We were hammered by monumental waves and I spent an evil night at sea, vomiting and surfing from one side of my cabin to another on a newly purchased mattress that had yet to be secured.  My watch was after midnight.  I did not want to let my father down and I somehow managed to stagger to the heavy steel door and push it open only to be smacked and completely drenched by a sideswiping wave.  Nauseous and soaked I climbed the ladder to the wheel house where my father took one look at me, laughed and told me to lie down on his berth.  I was in no fit state to relieve him and captain that ship.
Ten days later we motored from Havana to the Isle of Youth.  The harbour master insisted that we would be fine to enter but we ran aground in the very narrow entry to the harbour, effectively barring the entry of any other boat larger than a diving boat.  It was the straw that broke the camel’s back.  My father’s coughing fits were getting progressively worse and he was simply unable to function.  I took him to the hospital where he was quickly admitted and diagnosed with acute pneumonia.  It had shocked me to see him in hospital.  My vital and physical father suddenly looking jaundiced and corpse like, barely able to sit up in bed.
He recovered under the generous ministrations of a middle aged cuban doctor and despite his frailty, he still managed to flirt with her shamelessly.

After this, Spark had wanted my contacts or “coordinates” as he called them, in case anything like that ever happened again.  He had made a point of asking for my phone number on the day that I flew out of Belize city some weeks later.
The trip was by and large a disaster.  My father was ill, the crew were all suffering a variety of emotional complaints, the ship was falling apart

“Emma, we found him this morning.”

Spark’s voice was strangling and he let out one of those terrible sobs that are so very hard to hear in the throats of men.  Men that never cry.

“What do you mean you found him?
Found him where?
What are you talking about?”

“Jimmy’s dead Emma.  He was found in his berth on the ship.  He was killed, he bled to death.  It was an attempted robbery....”

On hearing this, I threw the phone across the room.  I wanted it as far from my  body as possible.  It seemed to fly slowly like a bird being shot from the sky.  Fluttering, spinning, falling.   I ran from the room and was dimly aware that James, had leapt from the bed to recover the phone and find out the rest of the story.  I went into the kitchen and hyperventilated.  Moments later I found myself on the floor, staring into my own stunned eyes, reflected in the surface of a stainless steel garbage bin.

Two days later, numb with shock, James and I found ourselves in an airplane flying to the other side of of the globe, to Roatan.  An island in the Caribbean sea, off the coast of Honduras.
I spent much of that flight weeping silently, watching the clouds and hating the world below.  My mother ten years before and now my father.  I was 26 years old.

Jimmy Walker died from a blow to the back of the head inflicted by a piece of 4x2 hardwood. He did not die immediately.  He left a trail of blood around the ship’s deck. A bloodied hand print on a port hole window.  Some clueless policeman had circled this print with his finger in the salted pane and written the words: “Non tocar”.

“Fucking amateurs” I thought to myself when I saw this piece of brilliant detective work.

Apparently, Jimmy dragged himself to the galley where he tried to stop the bleeding by sticking a piece of paper over the gash. He sat there  for a while then made a last heroic climb up to the wheel house.
The doctor later told me that it would have been as if he was severely drunk.  Drunk with concussion. He would not have known how bad the cut was.  He would have simply wanted to sleep it off. Deal with it in the morning.  But the morning did not come.  He bled continually until there was nothing left to bleed.  All the blood in his veins, pumped out by his heart, were soaked up by the mattress like a sponge.
He died some time during the night. Naked, in his berth, lying in in fetal position and it was in this position that my sister kathryn and I viewed his body.  Packed in an ice crate at the fishing plant, a frozen bubble coming out of his mouth.
There was no morgue on the island of Roatan.

We buried him at sea.  The Catholic laws in Honduras did not permit cremation or sea burial.  To get around this we motored him out to International waters. Two diesel soaked hours in the blazing equatorial sun.  His body slowly defrosting, sewn up in sail cloth and weighted with lead ballast. He looked like a beige coloured dugong.  After his body, we threw in a wreath of flowers  that had been collected by all the islanders that loved him.  It floated on the surface of the ocean, marking his burial site.  The ship’s captain made a note of the latitude and longitude. His coordinates.
Jimmy’s body slowly sunk to the seabed to the ticking, clicking noises made by lobsters and crabs.

Now I remember him whenever I look at the ocean.  I imagine his body slowly being nibbled on.  Feeding other creatures.  A part of their bodies now.  I imagine him to be eternal.  Moving freely like the ocean itself.  This idea brought me healing and comfort as does the knowledge that he was spared the indignity of getting old and infirm.  He would have utterly loathed it.

“Hand me a shot gun if it ever gets to that” he once told me.
“I won’t have you spoon feeding me chicken soup”.

His death was his own.  Unique, unexpected and blindingly painful for the ones that remained.  But somehow, it was strangely fitting, strangely right.  It was Jimmy’s death.  His own.  Just as his life had been.
Posted by Emma Walker at 01:42

Emma Walker
I work with paint, linen, timber, paper, ink, pencil, wood, plaster, string, sticks, charcoal, glue, cardboard, collage, photography, pigment, music, poetry, words, ideas, dreams and whatever else is needed to get the job done. I like to use my brain. I know some things and there is plenty more that I don't know or am in the process of learning. I like to share information and inspiration and exchange with other like minded folk. I intend to keep creating until my bucket is kicked. I like the idea that this blog could generate discussion or exchanges of a creative nature. Please feel free to comment or communicate if you would like to.